In September 2014 we did a DTS. The theme was ‘Unswerving Hope and Reckless Surender.’

We have made it our life goal to live by those words.

The gospel is a story of hope. Any situation, yes, even the Covid pandemic, can be seen with hope of better things to come if we focus on Christ. If the situation is bringing despair and hopelessness to your life then you’re probably focused on what the devil is trying to accomplish instead of what God is doing.

Reckless Surender. I included the definition of reckless here because it’s a word I’d rather not identify with but in this context it is fitting.

When God asks me to do something, the best thing to do, is to just do it, without considering the consequences because if he wants us to do it, he already knows all the details and doesn’t need to us try to control the end results.

Our plans to move to CA have taken us to a whole new level of Reckless Surender.

As we started planning for this move, I felt like God was saying that this trip was going to take more faith then we anticipated and a whole lot of trusting God when the situation looked impossible.

Last summer (2019) we started making plans to move to California. (Maybe sometime I can blog about what brought us to this decision but for now I’ll just tell the story of after we decided to move.)

We had a perfect plan.

Please note: If you invite God along on your journey, you might as well not make plans because he’s got a better one.

Our plan: After New Years we would start renovating our house: paint everything, put new flooring and new vanities in 2 bathrooms, new floor and new toilet in the 3rd bathroom, put a new floor in the mudroom, paint the front doors and all the shutters black and put in new garage doors.

We figured it would take about 2 months so by March 1st our house would be on the market and should be sold by June 2nd which was to be the last day of school, then we would leave for CA sometime between the 2nd and the 9th.

We were going to buy a house out there and spend the summer settling in before Kenzie started school out there.

That was our plan.

We started our renovations on time but it took longer the we planned and in the end we were in the second week of March (on a Thursday) before we finally got it listed.

But everything started out with a bang, we had like 5 or 6 showings between Thursday and Saturday. Sunday we had an open house and had a great turn out. (12-ish couple i believe.)

By the end of the week we had our house under contract. It was listed at $299,500 but we were getting $300,000 for it because the lady that was buying it knew there was 2 other people interested and I guess she wasn’t taking any chances and we weren’t about to complain.😎

The only problem was she didn’t want to wait till June 2nd to have settlement but she did agree to wait then, when she realized that we couldn’t really leave till school was out. However June 2nd meant we were leaving here the same day school ended which was making our schedule pretty tight but we’d make it work somehow.

There came Covid.🤦‍♀️ Tom Wolf started shutting everything down. I don’t know what this lady’s story is exactly but I know that due to covid She could no longer get financing to buy our house.

Our realtor suggested taking our house off the market because everyone pretty much hit pause and was waiting to see what was going to happen.

So that’s what we did.

Fast forward to May, our realtor got in touch wit Checkers and suggested putting it back on the market, despite real estate still being shut down, if we still wanted to move in June.

Houses were still selling slowly through virtual tours and brave buyers who bought without seeing the house in person.

For about 2 weeks we didn’t see much action other then maybe 3 or 4 zoom tours that Checkers did with potential buyers.

Guys. We were getting $300,000 before covid this was almost an insult.😜 We did, however counter offer $295,000. Which brought him up to $290,000 but we didn’t negotiate farther because we were convinced: if God can get us over asking price once he can do it again, so it just kinda stopped there for about a week.

And then real estate open up, and we had a couple showings scheduled instantly.

We now had a second interested buyer who was willing to top the first potential buyers $290,000 offer.

At this point we knew settlement wouldn’t happen till the end of June so we pushed our moving date back to June 24th or 30th depending how soon we could make settlement happen,

June 6th we flew to CA for a week in hopes of finding a rental property. We also got to meet Checkers boss to be and Kenzie got to see the school she’ll be attending.

Originally we were going to buy a house but we couldn’t agee on what to buy. My goal was to buy a duplex or a 4plex and squish ourselves in one tiny unit then turning the rest into air BnBs. It was the perfect plan in my opinion, it gave me something to do plus earned us some extra income.

Checkers, however, couldn’t see us moving our 5 people into a 2 bedroom, roughly 1000 square ft house. He wanted to buy a decent sized house that we actually fit into.(he probably had a point)😂

Finally we decided we would rent and then we’d have all the time in the world to look around for something to buy.

So we spent the week in CA looking at rentals.

Guys. Rent in Redding CA is insane. I guess rentals are a high demand due to all the BSSM students that flood Redding every year.

For a decent rental we were going to be spending around $1800-$2000 a month😳 If we took the buying route, our mortgage for the same size house would only be around $1200 a month.

So we went back to buying.🤦‍♀️😅

This was mid June so we knew that if we buy, with settlement our move was going to be pushed back to mid or even end of July.

At this point we’re thinking: “Well school starts August 13th as long as we’re out there before then.”

We spent a little over a week looking at houses and put an offer in.

It was a bank owned house and they turned down our offer. No explanation, no counter offer. Just nothing. Ok. Dead end.

We put an offer in on another house. It was sold before they even got to us.

By now we just needed a house. We were ready to settle on just about anything, I mean if we hated it we could always sell it and another one. Right?

Anyway 4 offers later we were about ready to pull our hair out. (It’s funny, when we discussed moving out there, finding a job for Checkers was what looked the most complicated, because who just hires a complete stranger from PA, you know? Well guess what, a job was the first thing we had lined up.)🤷‍♀️

A house looked easy however, I mean u can find rentals or house to buy pretty much anywhere, right?

Well, a house was the last piece to the puzzle that just didn’t fit.

We we’re talking about this Dilemma one night and I said: “We might as well just buy a truck and camper, we could pay it off right away and move out there completely debt free, not even a mortgage.”

I wasn’t serious. Like not at all. But Checkers was all in and he convinced me to actually consider it while he listed all the pros:

• We have a place to sleep on the way out and won’t have to spend on motel rooms.

• We can rent a long term campsite for $550 a month, utilities included instead of spending $1200 on a mortgage, utilities not included.

• This takes care of the second vehicle we need and were going to buy out there.

• our long term plan is for Checkers to start his own business, this way we can save more towards that plus he already has the truck he’ll need.

• There is a lot of land for $30-$40 thousand out there with sewer and water hook ups but no buildings, due to the fires that went through a couple years ago. We could buy one of these and park our camper on it now and eventually build on it.

• We can then rent out our camp as a rental for BSSM students or air BNB.

• Or we could rent out our camper, probably year around, because it’s a camping kind of area.

•And we can go camping or sightseeing along the west coast often if we own a camper.

Honestly, if we keep our living costs this low for awhile, the possibilities are endless.

And that is why we ended up with a camper that is currently being renovated and why we plan on living in it for a year or so.

The truth is though, I have no idea what God’s plan is, but I do know that is plan has proven to be superior to ours every single time.

Camper renovation pictures: (before and after) 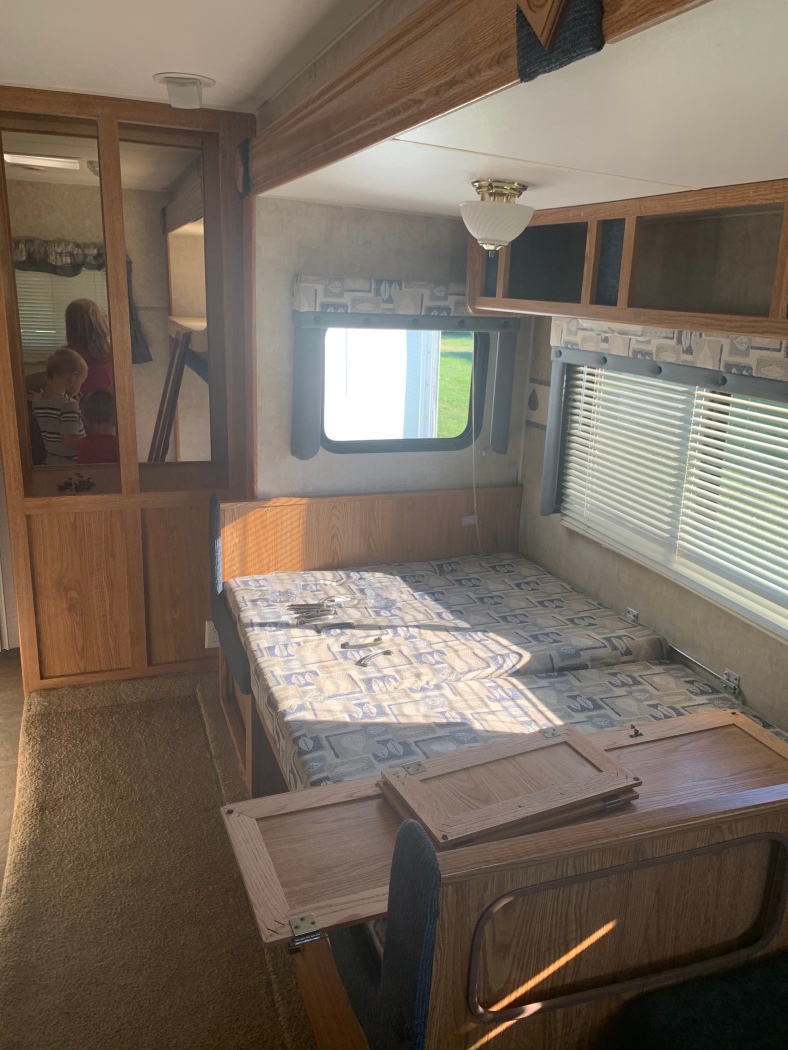 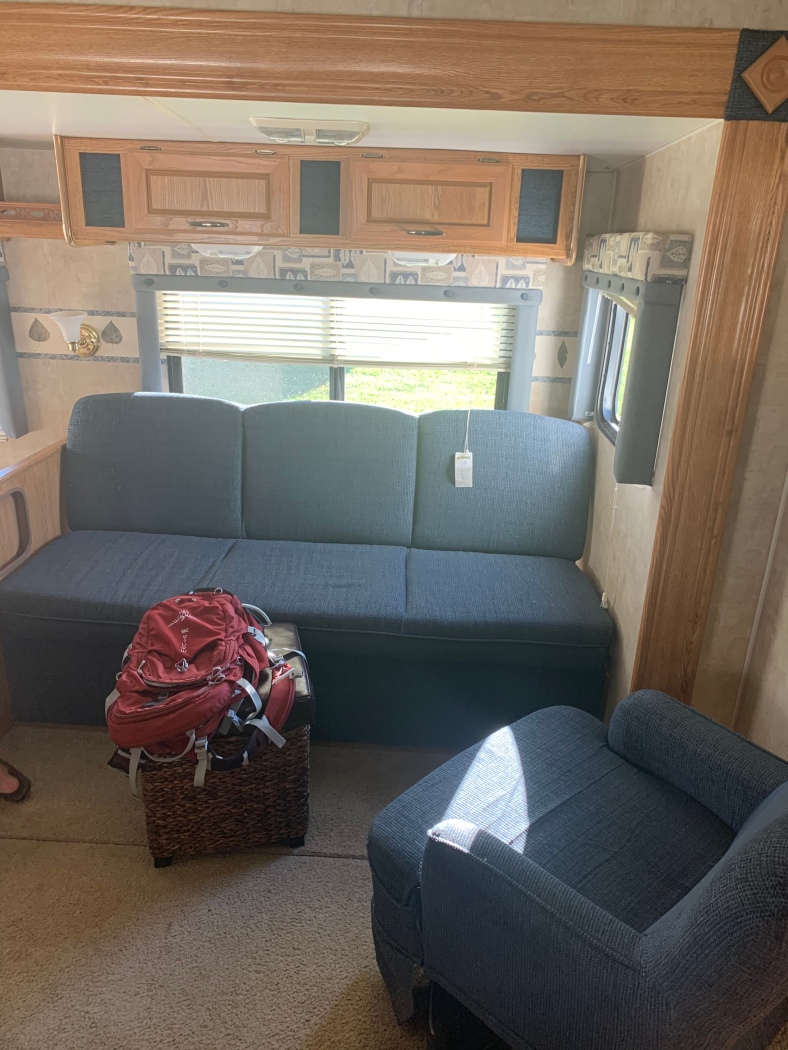 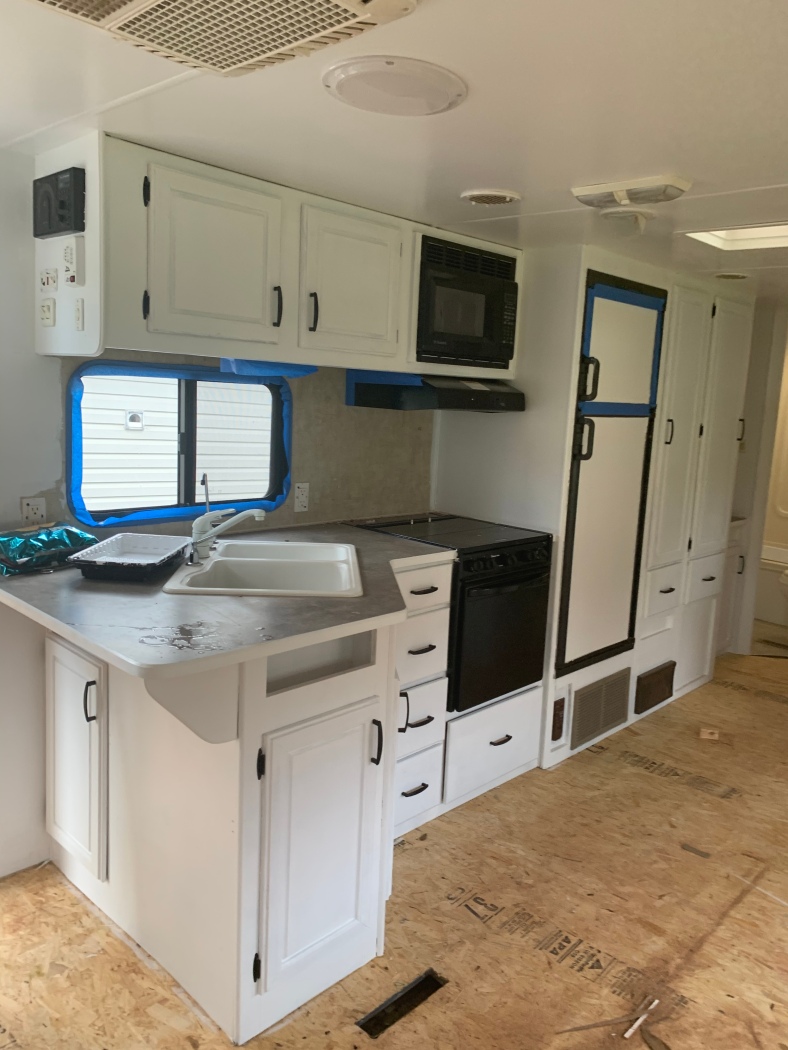