Jackie Pullenger. Maybe her name means nothing to you (it didn’t to me before DTS) but she’s a well known and respected missionary who serves the poor in the slums of Hong Kong. (She also wrote the book: ‘Chasing the Dragon’) At the age of 21 she got a one way ticket to Hong Kong and now at almost 70 she still lives there. Apparently it’s a huge honor to have her speak at a DTS because she feels if she doesn’t do the work she teaches about, her teaching holds no value. So having her agree to come is almost a miracle:) I think every single speaker we had mentioned the fact that she was coming. “Jackie Pullenger! How’d you manage to get her to come?!” So everyone was excited to meet this amazing lady but at the same time everyone was a little nervous and on edge about it to because the stories we heard about her, well they just sounded a bit intimidating! Once we met her we learned she really isn’t that ‘scary’ because she has a big heart and you can feel her love for the people around her. BUT like the stories we had heard she really is a bit intimidating. She is a no-nonsense kind of person, who speaks her mind and is very much in tune with the Holy Spirit. If she feels you are holding back when God is asking you to do something, she won’t hesitate to let you know that, ‘that simply won’t do!’ But even though she’s opinionated and outspoken she’s not forceful because she still believes, that its between you and God, and if you’re saying no to God, well, u shouldn’t do that! But thats your problem! Not hers!:) So it was an interesting week. Instead of 5 lectures(12 hours) we had 8 lectures(22 hours) So she did almost double what the other speakers did, and I think everyone was pretty much completely exhausted by Friday night. And that’s not counting the times when lecture should have ended at 9:30PM but went till 10:00PM and then there was worship and/or praying till 11:30PM. But it was so worth it. We learned so much.

She taught on the spiritual gifts that are listed in 1 Corinthians 12:28. She had very detailed teaching on this, and it was awesome because it made sense. Often it seems teachings on this passage leave me with more questions then answers. She says you only have these gifts from time to time. They are never permanent. Today the Holy Spirit might give you the gift of healing because theres someone he wants you to pray for, that he wants to be healed. Tomorrow you might pray for someone and they won’t be healed because God only gave you that gift for that one person yesterday. Today you might speak in tongues(publicly) we can always pray in tongues privately. Or do a miracle or heal someone, tomorrow u might not.

What is speaking tongues? When do u speak in tongues? When your heart feels heavy but you don’t know what words to pray, thats when you pray in tongues (which is praying through the Holy Spirit). Publicly speaking in tongues is ok but should be done with great caution. It should only be done when someone has the interpretation. Because if someone is there that doesn’t know about tongues, they might feel excluded, and that isn’t loving, and as christians we need to be loving!

Thursday evening Jackie was speaking at Canvas Church in Kalispell. Normally we have a Thursday night service here at the base and its open to any locals that want to come, but since it was Jackie they were expecting lots of people, therefore it was in a church because then we would have more room:) Before we went she told us that since she was speaking to us all week it was now our turn to be her ministry team. So after the service we got to pray for the people that came out. And Jackie got to stand up front and coordinate. And coordinate she did!:) She pointed to a guy in the crowd ‘You! In the red jacket!’ she said. The guy awkwardly looked around before realizing ‘she really is talking to me!’ So he went up front for prayer and I’m not sure exactly what she said but something about ‘that he will do great things for God! She also pointed out a few other people and told them what she thinks God is saying: ‘You! You will walk a path that no-one has yet walked! I’m pretty sure people were probably sinking down a little deeper into their seats thinking ‘ I hope she doesn’t notice me!’:) Like I said she’s a bit intimidating but she speaks truth! And we were blessed to have the opportunity to hear her speak. 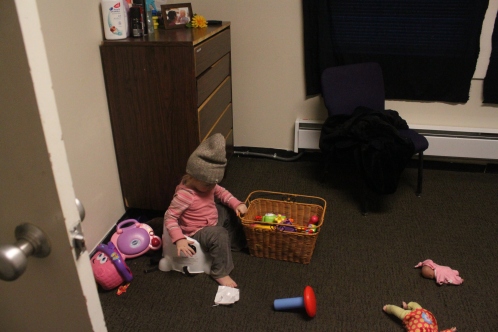 This made me smile:) When it got cold outside she was not about to wear a beanie! She didn’t like having ‘that thing on her head at all! But as time went on she got used to it and now she’ll wear it any time she can:) And if Checkers lets his lay around she’ll pick it up and wear it. she calls it a ‘hap’. We call it her hat or cap, so she decided why the confusion?! Ill just call it a hap!:)

It got COLD around here! This week the temp was mostly in the teens. But Kenzie didn’t mind. She still wanted to go outside!:/ We would eat lunch then head back to our dorm and since it was so cold we would try to hurry, but she was never in a hurry! She seemed to think ‘whats the big rush, its awesome out here!:) I really do wonder how long she could stay outside before she’d decide that it really is cold!

The countdown is officially on: 12 days till Thanksgiving and then my family is coming! And 3 1/2 weeks before outreach! Wow!

And that concludes week 8! Be blessed!